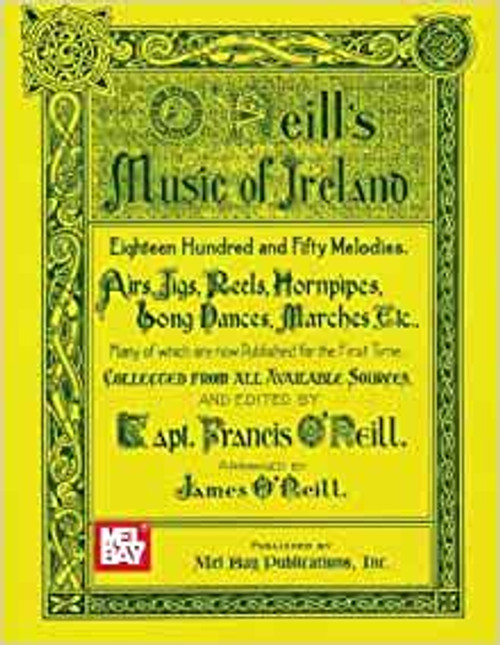 Known as “The Bible of Irish Music,” Mel Bay’s facsimile edition contains the original 1903 collection of 1,850 melodies consisting of airs, jigs, reels, hornpipes, long songs, and marches for fiddle or practically any other melody instrument. Each of the book’s 360+ pages presents 2 – 4 tunes in standard notation, together with stylistically appropriate ornamentation. Tune titles are given in Gaelic and in English with a few tunes appearing in two or three variations or “settings.” Intricate Celtic fonts similar to the cover illustration grace the main sections of this authoritative book. Famed Celtic harper, Turlough O’Carolan, is given his own segment entitled “O’Carolan’s Compositions,” which includes many of his planxties or tribute songs. The book concludes with a comprehensive alphabetic listing of song titles. Piper, fiddler, flautist and twice selected Chief of the Chicago Police Department by two different mayors, Francis O’Neill (1848 – 1905), was born in Tralibane, near Bantry, County Cork Ireland and immigrated to the United States after being shipwrecked while serving as a cabin boy on an English merchant ship. Although he himself could not read or write music, he collected tunes from the burgeoning Irish community in Chicago as well as from many of the major performers of his era. He also recruited many Irish musicians to serve on the Chicago police force. O’Neill would learn tunes by ear on a tin whistle and later play them for his nephew, James, or one of his sergeants who were capable of writing them down. In this fashion, he saved some 3,500 Irish melodies for posterity

A Collection of the Dance Music of Ireland

Music of Ireland A mighty Tune

Music of Ireland Where's the Crack

Carols of the British Isles for Acoustic Guitar Bellizzi, James